iimt - a world of opportunities

“To explore strange new worlds, to seek out new life and new civilisations, and to boldly go where no man has gone before”

This paper presents a Blue Ocean Strategy (Chan Kim, 2005) to provide economically viable telecommuni­cations services in rural areas of Africa, using Malawi as a case in point. The proposed business model is based on recent product innovations and aims at connecting the unconnected of this world (Clark, 2010).

This paper identifies a low-TCO technology mix for rural communications. On this basis, an innovative business model is developed that involves new actors with new roles and responsibilities. These new stakeholders will be able to build and operate sustainable and integrated voice and data networks for rural areas of emerging markets. The business model is applicable to a new crop of rural operators and its surrounding ecosystem of suppliers and business partners. These rural operators will eventually satisfy the pent-up demand of the 3 billion “base of the pyramid” subscribers (Figure 1) that to date were either prohibitively expensive to connect due to their remoteness or simply uneconomic due to subscribers’ low ARPU of just US$ 2-3 per month. 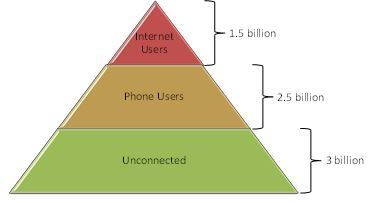 The services provided through these networks will empower rural communities, foster their economic and social welfare and contribute to the eradication of poverty. The three key elements needed for this model to work (technology, funding and stakeholders) are not only applicable to Malawi. They are generic and can be transposed to other developing countries around the world.

Despite the disruptively low CAPEX and OPEX of the new GSM all-IP technology presented in this paper, making a profit from subscribers with ARPUs of US$ 2-3 a month is still going to be very tough. However, the idea here is that a substantial part of revenues will come from roaming and termination charges. Since rural networks basically fill the coverage gaps left by existing operators, roaming agreements will not only be signed with foreign MNOs, but also with all local MNOs. This means that in the example of Malawi, any Airtel or TNM subscriber – just like any international traveller – going to rural areas will be able to seamlessly roam on the rural operator’s network. This will generate a healthy revenue stream for the rural operator, assuming that subscribers will keep their phones switched on to remain in reach (and don’t run out of credit). So even if they don’t place calls, they are likely to receive calls on roaming which will generate revenues for the rural operator.

In addition, it is a well known fact that rural subscribers in developing countries will not call much, but rather flash their counterparts in more affluent areas, thereby indicating that they should call back. Note that this will not generate termination fees for the rural operator. However, when calling back, the caller’s MNO will have to pay termination fees to the rural operator, which again adds to its revenues.

This model works well if there is a critical mass of rural subscribers that can be called. Thanks to flat-fee on-net tariffs, low cost handsets and the lack of alternatives, take-up amongst the rural population is likely to be very fast, thereby fulfilling the precondition of the model and enabling organic growth into even more remote areas.